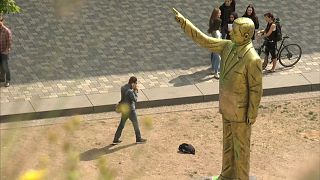 The 4-metre tall statue and was erected in Wiesbaden in western Germany as part of the local Biennale art festival.

The statue was removed Wednesday after being heaving vandalised with graffiti, with authorities saying that it had become a security risk.

"It is certainly appropriate to conceive of Erdogan as a controversial figure, and one that we are allowed to discuss freely here in this country," festival director Uwe Eric Laufenberg told Reuters.

The theme of the festival, which runs to September 2, is "Bad News".

Relations between Germany and Turkey have deteriorated in recent times, with the former condemning the arrests of around 50,000 people following the failed coup attempt against Erdogan in 2016.