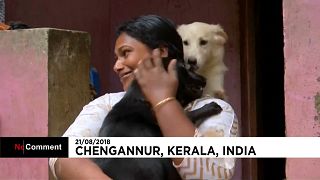 Locals are returning home to the southern Indian region of Kerala following the worst floods to hit the state in over a century.

The area was devastated by severe flooding and landslides that saw 383 people killed and 1.3 million housed in emergency camps.

Kerala's state minister, Pinarayi Vijayan, said on Tuesday that he would seek 100 billion rupees (around €1.2 billion) to reconstruct the region.

It is estimated that twice that amount is needed to restore the area.

Vijayan said that his "aim is not merely a restoration of the state to pre-flood times, but the creation of a new Kerala".

A state assembly meeting will be held on August 30 to discuss reconstruction and relief for the region, with Kerala's train system being shut since August 16.

Many celebrations in Kerala for Islam's holiest festival Eid-al Adha, otherwise known as the Festival of Sacrifice, are subdued, according to a local in Thiruvananthapuram, the capital of the state.

They said that Muslims are avoiding celebrations other than prayers for those affected by the tragedy.