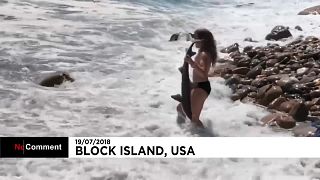 A girl picked up a stranded shark with her bare hands and released it back into the ocean at Block Island, off the coast of Rhode Island.

Video captured by the girl's father shows his daughter Ali grabbing the small shark, known as a dogfish, from shallow waters by some beach rocks.

The girl, carrying the shark, walked to a deeper part of the beach and released the animal back into the sea.