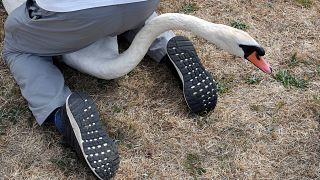 The annual census of Britain's Queen Elizabeth's swans on the River Thames has taken place since the 12th century, and the colourful tradition, known as "Swan Upping", continued on Monday.

The Queen's Swan Marker, wearing a swan feather in his hat and dressed in a scarlet coat, led six traditional wooden row boats up the river as they counted and measured swans and cygnets, checking them for any injuries.

It takes them five days to cover the stretch of the Thames between Sunbury near London out to Abingdon near Oxford, travelling a total of 79 miles.