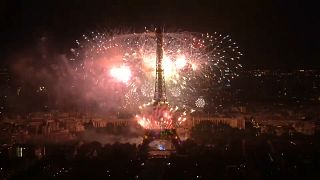 France capped its Bastille Day celebrations on Saturday (July 14) with a firework display over the Eiffel Tower, a day before French football team face Croatia for the World Cup final.

Earlier in the day, French armed forces joined a traditional parade down the Champs Elysees, in the presence of French president Emmanuel Macron and dignitaries, and jets streamed the national colours overhead.

July 14th is France's National Day, also known as Bastille Day. It commemorates the storming of the Bastille prison by angry crowds in 1789, helping kick off the French Revolution.