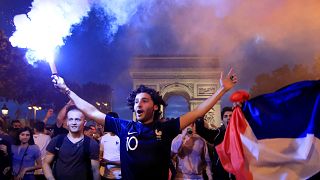 Fans chanted and jumped as they lit up flares of blue, white and red smoke on the Champs Elysees in Paris after France defeated Belgium on Tuesday to reach the World Cup final.

Les Bleus defeated Belgium 1-0 thanks to Samuel Umtiti, who scored the duel's only goal on the 51st minute, from which Belgium just couldn't recover.

French supporters showered their national team with praise, saying they are optimistic that France will end up winning the World Cup.

France will now advance to the competition's final duel on Sunday.