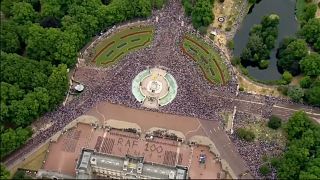 Almost 100 planes from Royal Air Force history assembled in the skies over London on Tuesday to mark their 100 years in service.

Three stealth F-35 jets made their first ever public appearance in the flyover alongside Puma, Chinook, Juno and Jupiter helicopters.

Over 20 RAF Typhoons spelt out ‘100’ as they darted over Buckingham Palace to mark the centenary. The aerobatic Red Arrows completed the fly-past.

The spectacular display was watched by thousands of spectators on the ground, as well as by members of the royal family from the Palace balcony.