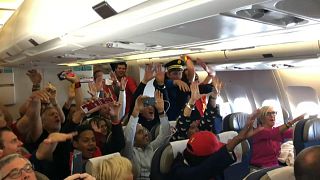 Belgian fans on their way to St Petersburg raised the roof during their flight.

The Master of ceremonies, dressed as Captain Haddock — a character from the comic series Tintin — roused the passengers who sang, cheered and completed a Mexican wave while strapped into their seats ahead of the Belgians' semi-final clash against France.