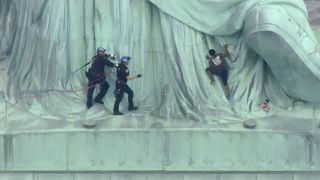 Police seize woman who clambered up Statue of Liberty

A July 4th protester who scaled the base of the Statue of Liberty has been escorted down by police after a four-hour standoff.

The incident prompted authorities to evacuate Liberty Island on Wednesday.

After two New York Police Department officers mounted the base to reach her, news helicopter footage showed the trio moving carefully along the edge of the statue's ropes towards a ladder which police had set up.

Earlier that day, several people who hung a banner emblazoned with a message about abolishing Immigration and Customs Enforcement on the statue's pedestal were arrested.