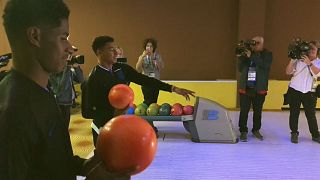 It's all fun and games for England's Kane, Rashford and Lingard

England play Colombia in their World Cup last-16 match on Tuesday, in what is one of the biggest games in the country's recent history. But if there was any pressure, you couldn't tell on the players' faces on Sunday.

Smiling captain Harry Kane played darts with a member of the media and appeared relaxed when talking to journalists and colleagues.

Elsewhere at England's team base, Marcus Rashford and Jesse Lingard played a game of bowling in front of the cameras, laughing and having a good time.

England will train in Repino on Monday before travelling to Moscow ahead of Tuesday's match against Colombia at the city's Spartak Stadium.