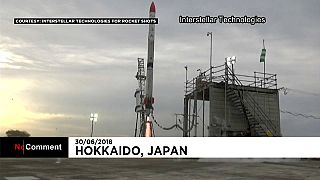 Japanese rocket crashed to the ground after 4 secs

A small rocket developed by a Japanese start-up company has failed to enter space.

It was launched on Saturday but it fell to the ground after 4 seconds from lift off, bursting into flames, to the shock of on lookers.

The 10-metre-long rocket was developed by Interstella Technologies, based in the northern most part of Hokkaido.

Firefighters say the area within a 600 metre radius of the launch site had been cordoned off fortunately, so there were no injuries.

The company plans to investigate to see what went wrong. It aims to become the first private Japanese company to send rockets more than 100 kilometres above Earth.