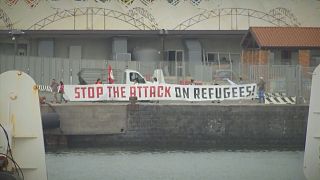 Migrants, including mothers and babies, arrive in Sicily

Italy's coast guard says its ship Diciotti has brought 932 migrants to shore in Catania, Sicily, as a diplomatic standoff continues over Italy's refusal to let another rescue ship dock.

During the voyage to Sicily, four pregnant women and a man suffering from fever were evacuated urgently and taken to hospitals.

The Aquarius migrant ship operated by SOS Mediterranee has been refused entry to Italian ports. It is now heading to Spain.