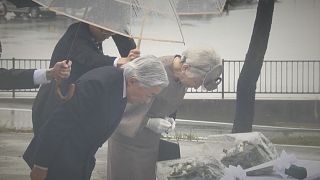 The Imperial couple visited the Haragama district of Soma City on Monday, the final day of their 3-day tour of the prefecture. The Empress attended the day's events as scheduled, despite developing a fever the night before.

More than 200 residents of the area were killed in the tsunami triggered by the earthquake on March 11th, 2011. The Emperor and Empress visited the district 2 months after the disaster to mourn the victims.

Monday marks exactly 7 years and 3 months since the megaquake.