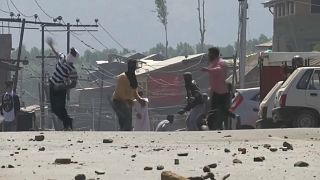 Clashes continue in Srinagar over death of a protester

Clashes between protesters and Indian security forces continued in Kashmir on Saturday, with police firing tear gas in response to protesters throwing rocks.

The violent confrontation took place a day after it was claimed that an armoured paramilitary vehicle ran over three people while trying to drive away from protesters.

Kaiser Bhat, a youth who was severely injured after allegedly being hit by the vehicle on Friday, reportedly died on Saturday according to the Press Trust of India.