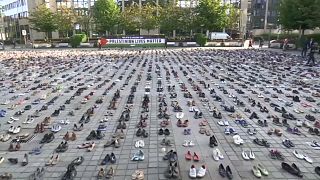 Campaign group Avaaz on Monday unveiled a display of 4,500 pairs of shoes in Brussels, one for every Palestinian life lost in the Israel-Palestine conflict over the past decade.

The display was set up near the European Council building, where EU foreign ministers were meeting.

The EU meeting comes at a time of heightened tension along the frontier between Gaza and Israel.