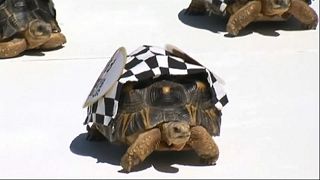 Tortoises race in the Zoopolis 500 'sprint'

Indianapolis Zoo hosted its annual Zoopolis 500 on Wednesday, known as the "greatest spectacle in tortoise racing".

The event, which is one of the zoo's oldest and most popular, took place in preparation for this weekend's Indianapolis 500 — an IndyCar race.

Ed took an early lead and went on to win the prize — a towering platter of fruit.