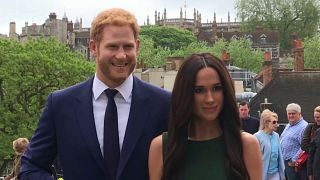 Harry and Meghan waxworks go on display in Windsor

Prince Harry and Meghan Markle's wax figures went on display in Windsor ahead of Saturday's wedding.

The two lifelike figures were presented to the public a short distance from where Prince Harry and Meghan will be wed.

A team of 20 people at Madame Tussauds have been working on the figures ever since the wedding was announced in November.

The statue of Prince Harry was originally created for his 30th birthday in 2014 but has been updated for his special day.