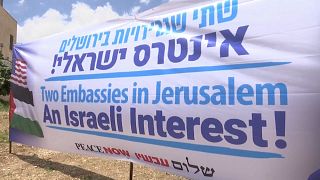 Hours ahead of the opening ceremony for the new US embassy in Jerusalem, Israelis on both sides of the political divide on Monday expressed strong opinions on the move.

Activists from the NGO Peace Now, which advocates a two-state solution to the Israeli-Palestinian conflict, tried to put up a banner calling for two US embassies in the contested city, with another in the eastern sector of the city.

"Two embassies in Jerusalem is the real Israeli interest," read a Peace Now banner, which was later taken down by police.