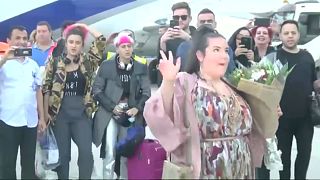 Israel's winner in the Eurovision song contest, Netta Barzilai, landed in Tel Aviv early on Monday (May 14), where she danced to a crowd of applauding fans and journalists, still on the runway.

On Sunday, several thousands of Israelis flocked to central Tel Aviv after Barzilai was announced winner of the Eurovision contest.

Her win in Lisbon was Israel's fourth in the glitzy pageant, watched by over 200 million people around the world. It also guarantees their right to host the event next year, which will be Israel's first since 1998.