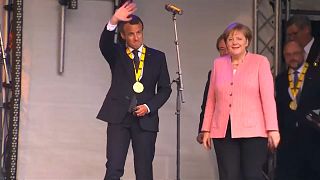 French President Emmanuel Macron on Thursday (May 10) urged Germany to be bold in its ambition for European renewal, saying the European Union could not afford to show weakness and division in the face of outside threats and resurgent nationalism within its borders.

Receiving the Charlemagne Prize for offering a "vision of a new Europe" in the German city of Aachen, Macron said bluntly that it was time for Berlin to let go of its obsession with a budget surplus - an achievement he said that came at the expense of others.