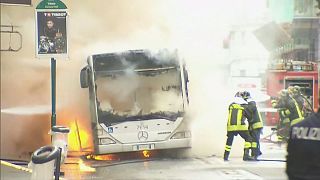 A public bus burst in flames in Rome's central Via del Tritone. A huge cloud of black smoke came from the burning bus and it could be seen from a certain distance away.

A woman passer-by suffered minor burns and was taken to the city's Santo Spitito hospital. The passengers were upset but there were no injured.

The incident caused massive traffic disruption in the area and there was a brief moment of panic when a tyre exploded.

A short circuit is thought to have caused the fire in the bus, which was around 15 years old. Eye witnesses said that the fire started at the back of the vehicle and the driver unsuccessfully tried to put it out with an extinguisher he had aboard. He made all passengers get off and afterwards there was an explosion.