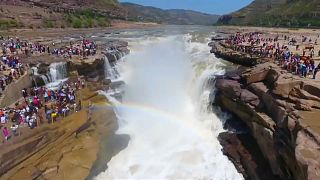 Thousands of Chinese holiday-makers visited the magnificent Hukou Waterfall in north China’s Shanxi Province on the first day of the three-day Labor Day holiday on Sunday.

The scenic area management sold more than 14,000 tickets on Sunday alone, four times more than on an ordinary day.

To cope with the surge of visitors, the management made an emergency plan to limit the flow once the number hits its maximum capacity of 15,000. At the same time, security was beefed up, and more personnel dispatched to direct traffic.

Located on the border between north Shanxi and northwest China's Shaanxi provinces, the Hukou Waterfall is the second largest waterfall in China and the largest yellowish waterfall in the world.