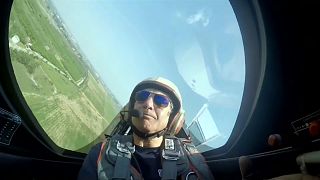 Sunday's show featured world leaders in precision formation and aerobatics including the ANBO trio from Lithuania and the Yakovlevs from Britain.

Dubbed the "presidential team," the ANBO trio is led by Rolandas Paksas who was president of Lithuania from 2003 to 2004 and is a former member of both Soviet and Lithuanian national aerobatic teams.

All three of the team's pilots carried out astonishing high-speed passes at over 300km/h and made breathtaking crosses with only two metres between the planes.