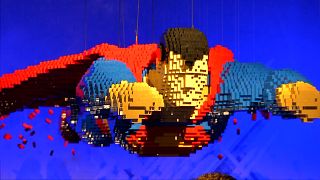 Tired of Wall Street, American lawyer Nathan Sawaya turned to lego and built a new life as an artist. His exhibition, "Art of the Brick" featuring DC superheroes, will open in Paris's Parc de la Villette on Sunday, the latest stop on a global tour that began in 2007.

The 5.5 metre-long Batmobile, parked inside an intricately designed batcave, was shaped with 500,000 bricks - the largest scuplture in the show.

Working mostly alone, Sawaya also recreated vintage covers of DC favourites such as Flash and the Green Lantern, and busts of the popular characters.

Having already toured Sydney, London, and Rome with varying themes, the "Art of the Brick" will be shown in Paris until August 19.