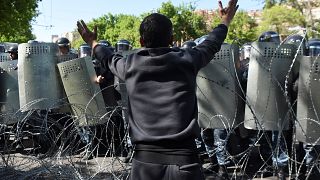 Thousands of protesters take to the streets in Armenian capital

Several thousand people blocked traffic in the Armenian capital of Yerevan on Monday in protest against a recent change of government that the opposition sees as a move by the ex-president to stay in power.

Serzh Sargsyan, who served as president from 2008 until earlier this year when he stepped down because of term limits, is set to be approved as prime minister on Tuesday.

The new system sees the president's powers weakened and the prime minister taking a dominant role.

Armenia's opposition views the move as Sargsyan's attempt to stay in power indefinitely and has vowed to keep protesting around the clock.

About 10,000 people started marching toward parliament early Monday afternoon and were blocked by police using tear gas and stun grenades.

An Associated Press reporter saw several people wounded and at least four of them were transported away by ambulance including protest leader Nikol Pashinian.