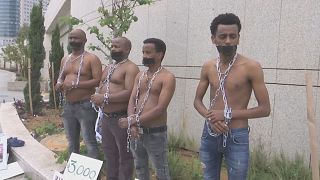 Dozens of migrants from Africa and their Israeli supporters protested on Tuesday against Prime Minister Benjamin Netanyahu.

The protesters gathered outside the prime minister's office in Jerusalem and at government offices in Tel Aviv after Netanyahu said he had decided to cancel a deal with the United Nations to resettle African migrants in Western nations.

After meeting with angry residents of south Tel Aviv on Tuesday, Netanyahu says he reconsidered after hearing their concerns.

Netanyahu faced heavy criticism from nationalist allies, even within his own ruling Likud party.