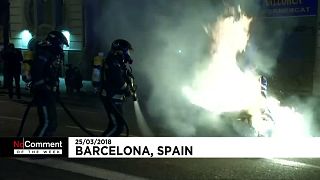 It has been a dramatic seven days in Europe and beyond, involving political clashes, international incidents and moving ceremonies. Here are some of our highlights and lowlights of the week.

In Texistepeque, Salvadorians celebrating the Easter season are whipped for their sins by ‘devils’ in a traditional ceremony meant mark the universal struggle between good and evil.

In Israel, two aircraft collide at Ben Gurion International Airport when a reversing Boeing clips the tale of the other plane. Thankfully, no injuries among passengers or crew were reported.

Elsewhere in Russia, Siberians mourn the deaths of family and friends that were caught up in a shopping mall blaze in Kemerovo, 3,600km east of Moscow.

In Tokyo, thousands of peach trees reach full bloom, delighting visitors and photographers in the mountainous village of Higashi-Chichibu.

While in San Fernando, Filipino Catholics commemorate the death of Jesus Christ on Good Friday.