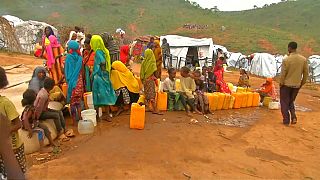 Around 10,000 Ethiopians - mainly members of the Oromo ethnic group - crossed into Kenya earlier this month, according to the Kenyan Red Cross Society, after several civilians were killed in what the Ethiopian military said was a botched security operation targeting militants.

Oromo refugees at a camp in the Kenyan town of Moyale said a prime minister from their own community might change things.

Oromiya region, which surrounds the capital Addis Ababa, has been rocked by violence since 2015. This is fuelled largely by a sense among young members of the Oromo ethnic group, which makes up roughly a third of the 100 million population, that they are politically and economically marginalised.

The ruling coalition chose former army Lieutenant-Colonel Abiye Ahmed, a 42-year-old polyglot from Ethiopia's largest ethnic group as prime minister on Tuesday (March 27) in an attempt to ease ethnic tensions and appeal to the legions of disaffected youth.

Abiye's Oromo heritage appears to be a calculated attempt to soothe anger. But this broader room for manoeuvre may be hemmed in by the strictures of the Ethiopian People's Revolutionary Democratic Front (EPRDF), the rebel coalition that took over from the Derg military regime in 1991.