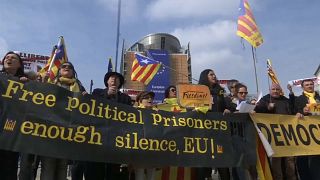 Some 200 pro-Catalan demonstrators gathered in front of the European Commission in Brussels on Sunday to protest the detention of former Catalan President Carles Puigdemont.

Puigdemont was detained Sunday by German police on an international warrant as he tried to enter the country from Denmark. He was on his way back to Belgium where he had been staying since fleeing Spain following a failed bid by his regional government in October to declare independence from Spain.

Spain was plunged into its worst political crisis in three decades when Puigdemont's government flouted a court ban and held an ad-hoc referendum on independence for the northeastern region in October.