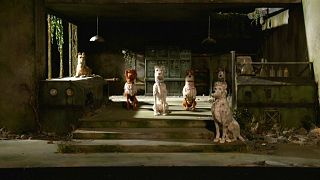 Puppets from "Isle of Dogs" go on display in London

The stop-motion feature is a quirky movie about a Japanese city that deports its dogs to a garbage dump island during an outbreak of canine flu. The film follows the adventures of the mayor's 12-year-old adoptive son Atari, who flies a plane to the island to rescue his beloved pet Spots.

The mayor stops a scientist from curing the pets and a U.S. exchange pupil at the local school has her visa withdrawn when she suggests he is trying to turn people against dogs.

Although the science-fiction style movie alludes to immigration reforms, the filming actually started long before the debates on immigration and border walls now dominating the U.S. airwaves.

Modeller, Angela Kiely, urged people to visit the exhibition as all the puppets and props are "made by hand".