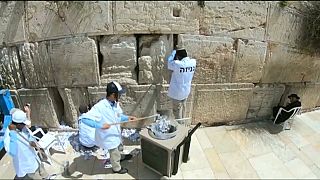 The Western Wall in Jerusalem gets a spring clean

Spring cleaning has started at Judaism’s Western Wall in Jerusalem.

A team of cleaners removed written prayers that visitors traditionally cram into its crevices.

Twice a year, the Rabbi of the Western Wall oversees the collection of thousands of notes and the papers are then buried on Jerusalem's Mount of Olives in accordance with ritual.

The Western Wall is a remnant of the compound of the Second Temple that was destroyed in 70 AD.

Jews as the Temple Mount.