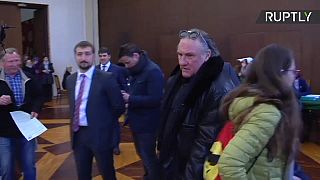 Depardieu is a friend of President Vladimir Putin who presented him with a Russian passport in 2013 during a tax row between the actor and French authorities,

The actor upset his fellow countrymen in 2012 when he declared he would hand back his French passport and move to Belgium to avoid a tax hike by the then Socialist government.

His popularity slumped further after he accepted a Russian passport from Putin.

The star of 'Cyrano de Bergerac' and the 'Asterix & Obelix' franchise, who is still a French citizen, has since become a staunch defender of the Kremlin's policies, including its annexation of Crimea.