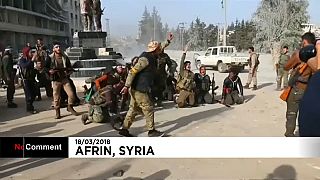 Turkish forces and their Syrian rebel allies swept into the northwestern Syrian town of Afrin on Sunday (March 18), raising their flags in the town centre and declaring full control after an eight-week campaign to drive out Kurdish YPG forces.

Free Syrian Army spokesman Mohammad al-Hamadeen said the fighters entered the town from the north, east and west. A war monitor, the Syrian Observatory for Human Rights, said pockets of YPG fighters were defying orders to withdraw, but Turkish forces were in control.

Turkey's armed forces said in a statement that troops were combing the streets for mines and improvised explosive devices. The army posted video it said was filmed in the centre of Afrin, showing a tank stationed under a balcony draped in the Turkish flag, with an FSA banner being waved.

More than 150,000 people fled Afrin in recent days, the Syrian Observatory said, as Turkey pressed on with its campaign despite a U.N. Security Council call for a 30-day ceasefire across Syria.