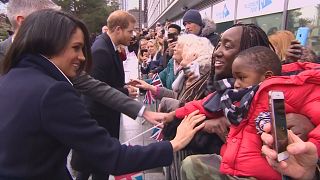 Harry and Meghan fascinate young and old in Birmingham

Prince Harry and his fiancee Meghan Markle were greeted by young and old during a Birmingham walkabout on Thursday March 8th on a visit to mark International Women's Day.

The couple were in the English city to learn about projects that support young people with an emphasis on promoting the next generation of women in science and technology.

Earlier in the day, the Daily Mail newspaper reported that Markle had been baptised by the Archbishop of Canterbury Justin Welby, ahead of her royal wedding in May to Britain's Prince Harry.

When Markle, 36, and Harry, 33, announced their engagement last November, his office said Markle, who attended a Catholic school as a child, identified as a Protestant and would be baptised and confirmed before their marriage on May 19.