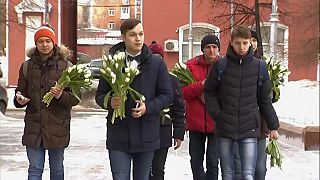 Saying it with flowers

International Women’s Day in Russia is celebrated with flowers, gifts, champagne and a fancy meal.

The holiday has been celebrated in Russia for more than a century. Today, it has become something closer to Mother's Day and Valentine's Day, all rolled into one.

Men show their appreciation for the women in their lives, at work and among friends and family, by gifting flowers. 50 million flowers were brought to Moscow alone for this day. Tulips mostly came from the Netherlands, scarlet roses from Ecuador, and orchids from Thailand.

Men are storming flower markets from the early morning to get a bunch of flowers for close family and beloved ones. Volunteers in many Russian cities continue a tradition of gifting flowers to the women in the streets, wishing them all the very best.

Chanting, and dancing on the streets of Madrid, hundreds of women began a bike protest in the Spanish capital on Thursday, (March 8), as part of the events planned for their first nationwide strike on International Women's Day.

The strike aims to highlight discrimination, harassment and violence against women in Spain, which the organisers see as a product of macho attitudes.

Among the enthusiastic protesters was Noemi Sanchez, an engineer who works at a security company in Madrid and who decided to join the strike.

Sanchez said she feels lucky that she has not experienced discrimination at work, but wanted to join the protest because she is convinced that differences between men and women persist in the country and that there is still work to be done to change attitudes.

Women staged strikes in dozens of cities across Spain last year, but this will be the first nationwide walkout which is expected to include teachers, journalists, healthworkers and politicians, including Madrid's Mayor Manuela Carmena and her Barcelona counterpart Ada Colau.