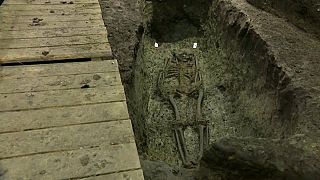 Since December, a team of archaeologists from the Museum of Copenhagen have secretly been excavating 20 skeletons discovered under City Hall Square.

The bones belong to men, women and children who are believed to have lived around one thousand years ago.

Archaeologists have dubbed them 'the first Copenhageners'.

The graves are lying just a metre under the asphalt on the busiest square in Denmark - and it's thought there are more skeletons below.

It's hoped further tests on the skeletons will reveal new information about the people who helped found the Danish capital.