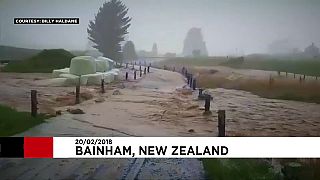 Although its been downgraded to a storm its high winds have brought gusts of up to 150 kilometres per hour and a state of emergency has been declared in seven districts.

Prime Minister Jacinda Ardern said soldiers have been mobilised to the worst-hit areas where people have been advised to stay indoors until the storm passes.

The storm has also confused meteorologists after it split into two eyes over South Island.