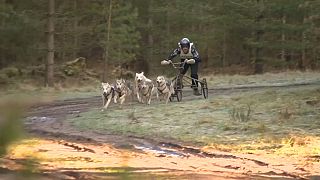 Teams of up to eight dogs and their owners have been racing through forest areas to compete for the British Siberian Husky Dog Championship. The Championship is made up of 16 races throughout the country.

The Huskies are harnessed and rigged to a three or four-wheeled device where the ‘musher’ sits.

Each vehicle is tested before every race to ensure that it is race worthy and safe for the owner and their dogs.

The United Kingdom’s first Husky race took place in 1996 and the sport has grown in popularity ever since, becoming one of the fastest growing dog sport in the world.

Race organizer; Steve Biddlecome said: "Within our championship fun is the name of the game because we have 260 entries this weekend. "

The Siberian Husky Club of Great Britain said that husky dog racing began over 4000 years ago, long before the first imported huskies to the UK in 1968.

The race at Elveden Forest was won by Steve Rooke and he said: " A good team is a team that is trained and conditioned very well, but primarily they are all of the same ability. You are only as quick as your fastest dog. "

The final race of the championship takes place in Rendlesham, Suffolk on 4th March 2018.