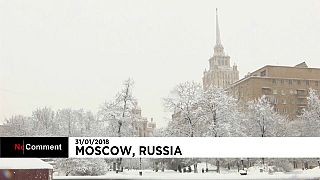 In  24 hours, 16 centimetres of snow has covered the streets of Moscow.

People were seen making their way through snow hills and covering their faces from the falling snow in the Russian capital.

The snowfall, which created a long waited winter wonderland for Muscovites, at the same time created loads of work for communal workers and chaos for the city's commuters, many of whom spent more that usual in traffic.

According to forecasts, snowfalls and blizzards will continue in Moscow through the next several days with temperatures dropping down to -8 degrees Celsius (17.6 Fahrenheit) during the day and -13 degrees celsius (8.6 Fahrenheit) at night.