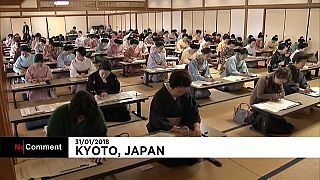 The event is part of an annual training session sponsored by a local foundation aimed at preserving and promoting the traditional entertainment culture.

More than 90 geisha, known as "geiko", as well as "maiko" and junior apprentices from the city's five districts for the female entertainers visited Daikakuji Temple.

Using a brush and ink, the women wrote the Chinese characters in one of the famous Buddhist scriptures.

The practice is believed as a work of religious merit.

One of the "maiko" apprentices, who is from Ibaraki Prefecture, eastern Japan, said she copied a sutra for the first time in her life.

The foundation is offering this kind of seminar to the women, who are usually busy attending parties or engaged in dance and other training, to deepen their understanding of traditional culture.

Many of the female entertainers nowadays are from other parts of Japan, meaning that they are not so familiar with Kyoto's local tradition and culture.