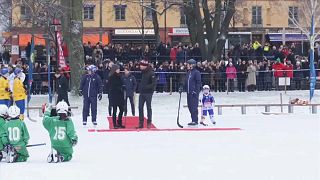 Britain's Prince William and Catherine, the Duchess of Cambridge on Tuesday, (30 JAN. 2018), kicked off their four-day tour of Sweden and Norway by watching a game of bandy, a popluar sport in the region.

"Today the players received a memory for their entire lives, every one of them, I spoke to afterwards, they were so happy. They had met Kate, they had met William, you know the royal family in England, this is some kind of a role model for them, so they think it was marvelous," said one of the participants.

The U.K. royals watched a game of bandy, similar to ice hockey, and even had a go at hitting the ball themselves in a snow-covered park in the Swedish capital, Stockholm.