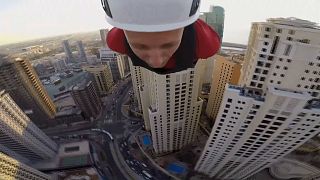 In case you missed it: The world's longest zipwire, and other No Comme

A mezzanine in the Indonesia Stock Exchange came crashing down at the start of this week, leaving 70 people injured. The dramatic scene was captured on the Jakarta building's CCTV.

The moment a Georgia firefighter showed lightning reactions made for nail-biting watching on Tuesday as Dekalb County Fire Rescue Department released footage of the moment a child was thrown down from the second floor of a burning building into his arms.

Also making our list is the unlikely sight of a car dangling out of the second story of a building—the result of an accident in Santa Ana, California.

In Colombia, the wreckage of a bridge outside the capital city could be seen from the air. Ten workers died when the bridge collapsed and fell into the canyon below.

Thrill seekers in Dubai showed what they're made of on the world's "longest and fastest urban zip line," according to its creators. The attraction stands at 168 metres high and can reach speeds of 80 kilometres an hour.

Researchers in the Arctic had an unexpected feathered visitor in the form of Adelie penguin who climbed aboard their dinghy.

Finally, Putin rounded off Thursday by taking a dip in an icy lake, part of an Orthodox Christian ritual to mark the feast of Epiphany.