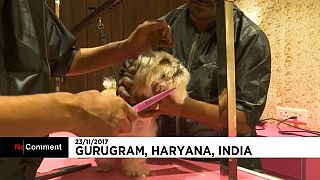 Placer County Sheriff Deputy Don Nevins was patrolling the Lighthouse Shopping Center when he came across what appeared to be a female bear outside a Taco Bell.

As Nevins approached, the bear ran toward the smaller bear trying to get into a rubbish bin outside a CVS Pharmacy.

The pair scampered around a corner where a third bear standing on his hind legs joined them on their escape.

Nevins asked chuckling, “What are you guys doing?” Then added, “Fleeing felons.”

A luxury dog hotel in India’s northern Gurugram city is slowly becoming a popular hotspot for pooch lovers, who want to pamper their furry friends.

The three-month old hotel provides a wide array of services, including saloon and spa, veterinary care, television lounge, deluxe suites, swimming pool and café all rolled into one.

The first-of its-kind hotel for pets is the brainchild of Deepak Chawla and his wife, Jaanwi.

Chawla says providing upkeep services for animals were not a luxury, but a basic need for them.