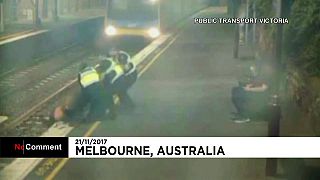 Updated: 24/11/2017
<p>Dramatic <span class="caps">CCTV</span> footage has been released showing a woman narrowly avoiding being hit by a train in Melbourne.</p> <p>The woman tried to cross the tracks at an inner suburban station late at night, unaware a train was approaching.</p> <p>As the woman reaches out to someone nearby three police officers on duty at the station realise the woman is in trouble.</p> <p>They rush to help her – and manage to pull her up only seconds before a train comes rushing into the station.</p> <p>It’s not clear why the woman was on the tracks – local media suggest she may have been under the influence of alcohol.</p> <p>The train driver had hit the brakes, but there was no way of stopping it in time.</p> <p>Thankfully the woman managed to escape without injury.</p>
no comment