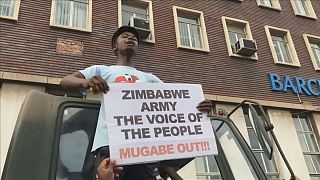 Zimbabweans celebrating the expected fall of President Robert Mugabe marched towards his residence in the capital Harare on Saturday.

Hundreds of thousands of people flooded the streets of the capital singing, dancing and hugging soldiers in an outpouring of elation as Mugabe’s rule comes to an end.

The 93-year-old Mugabe has been under house arrest in his lavish ‘Blue Roof’ compound in Harare, from where he has watched support from his Zanu-PF party, security services and people
evaporate in less than three days.

Mugabe’s downfall is likely to send shockwaves across Africa, where a number of entrenched strongmen, from Uganda’s Yoweri Museveni to Democratic Republic of Congo’s Joseph Kabila,
are facing mounting pressure to step aside.