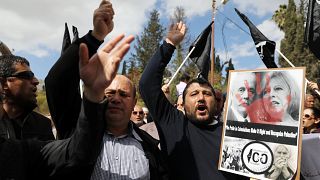 Updated: 02/11/2017
<p>Thousands of Palestinians took to the streets in protest on the 100th anniversary of the Balfour Declaration. </p> <p>The declaration by the then British foreign secretary Lord Arthur Balfour stated the UK government supported “the establishment in Palestine of a national home for the Jewish people”. </p> <p>The following decades saw a spike in the number of Jews moving to the region as Zionist state institutions took root. </p> <p>In Ramallah, West Bank, around 3,000 people marched from the city centre to the British consulate in Jerusalem. </p> <p>Rawada Odeh, a demonstrator, said she was protesting because Balfour promised a home to the Zionists while neglecting that there is a “Palestinian population here in our land.”</p> <p>“The land does not belong to Balfour,” she said. “We are Palestinians, and we are living here and we are following our issue till we succeed.”</p> <p>Israeli Prime Minister Benjamin Netanyahu is marking the anniversary of the Balfour Declaration in London at a dinner with Theresa May.</p>
no comment