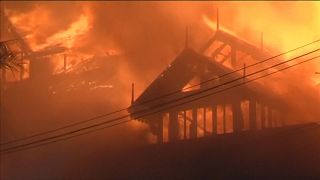 Landmark hotel in Yangon burns to the ground

A huge fire broke out at a lakeside hotel in Yangon before dawn on Thursday, (October 19), gutting the entire building and leaving two injured.

“We started arrived at 1:45 am and rescued two injured people – one is a Chinese female foreigner, who jumped out from the third floor from fear and injured her back. We sent her to Yangon General Hospital. Another one is a fireman who was sent to the same hospital,” said rescue team officer Kyaw Zaw.

Guests at the hotel were evacuated from the building and the fire was put under control at daybreak. The cause of the blaze is under investigation, officials said.