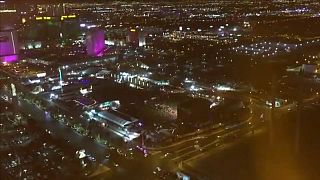 Updated: 02/10/2017
<p>Amateur footage emerged on Monday showing scenes of mass panic and people fleeing after a gunman on the 32nd floor of the Mandalay Bay Hotel and Casino opened fire on an outdoor country music festival, killing at least 50 people and wounding more than 100.<br /> The gunman was identified as 64-year-old Nevada resident Stephen Paddock.<br /> Paddock died after police confronted him on Sunday on the 32nd floor of the casino-hotel tower on the Las Vegas Strip.<br /> It’s the deadliest mass shooting in modern US history.</p>
no comment