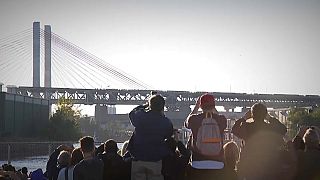 Updated: 01/10/2017
<p>A boom, and a cloud of grey dust: New Yorkers watched the controlled demolition of the old Kosciuszko Bridge between Brooklyn and Queens on Sunday (Oct. 1).</p> <p>A new bridge is being built to replace it after decades of complaints over its congestion.</p> <p>The Kosciuszko Bridge opened in 1939. Rising 125 feet above the industrial Newtown Creek on the Brooklyn-Queens Expressway, it was long past its expiration date, <a href="https://www.nytimes.com/2017/10/01/nyregion/kosciuszko-bridge-demolition.html">as the New York Times</a> notes: built for 10,000 cars a day, it was forced to carry 180,000.</p> <p>A portion of the bridge was lowered onto barges and taken away to be recycled in July.</p> <p>The eastbound span of the new Kosciuszko Bridge opened in April 2017. The second span is scheduled to be finished by 2020.</p>
no comment