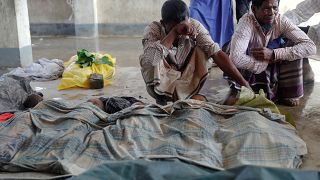 Updated: 29/09/2017
<p>Aid workers are scrambling to help the Rohingya Muslims now crowded into the Cox’s Bazar region of southern Bangladesh after a spasm of violence in Myanmar’s Rakhine state sent them fleeing across the border.</p> <p>About 480,000 men, women and children have arrived in Cox’s Bazar since the end of August, according to United Nations estimates. Most came with nothing more than the clothes they<br /> wore.</p> <p>Nearly 200 of the women have given birth since they arrived and another 20,000 are pregnant.</p>
no comment